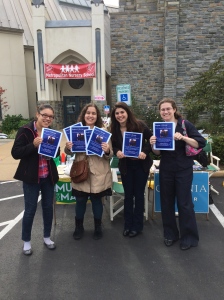 Me, with some of the women who inspired and supported me to go through with the campaign! I am so grateful for their support and the fact that they came out on Election Day!

My name is Regina and I am currently a student, living on American University’s main campus. This campus is in Ward 3 of the District of Columbia, and is represented by Advisory Neighborhood Commission (ANC) 3D. This past November, I ran and became the Advisory Neighborhood Commissioner for ANC 3D single-member district (SMD) 07. As Commissioner of ANC 3D 07 I represent constituents that live in Anderson, Centennial, Hughes, Cassell, Leonard, McDowell and (part of) Letts Halls on American University’s campus. In order to run, I had to file as a write-in candidate at the Board of Elections. Rory, who was the incumbent was graduating, and decided not to run. In fact, he invited any and all questions I had about being a commissioner, and what running entailed. My race was uncontested, I just had to have enough votes for the Board of Elections to consider my election legitimate. It was, and I was sworn-in to office in January, on the same day that the Mayor, Shadow Representatives and Council Members were sworn in. Standing on stage, being sworn in, and smiling at my mom who was taking pictures honor-roll style has been one of my proudest moments.

My campaign was unimpressive. I spent a grand total of $58 on campaign materials, which covered printing fliers at Staples. I spent about 30 hours handing out flyers, calling my friends which were registered to vote in DC, explaining that DC allows same-day voter’s registration to those interested, and standing at the voting sites explaining that I was running as a write-in candidate. A big part of campaigning, in my case, was explaining to students (who come from across the country), what an ANC was. As someone who has volunteered on several campaigns, I know how unremarkable my campaign sounds in the post Citizen’s United political climate. In my case, becoming a Commissioner was not difficult. Yet, it felt terrifying to decide to run, announce it, and call on my peers to vote for me. The fact that I had so many friends and mentors support me and campaign with me on election day made it easier. The truth is, it was a BIG DEAL.

The idea of announcing that I wanted to run for office, even one with a primarily advisory role, felt arrogant. It was uncomfortable for me to bring it up, or post it on social media without feeling like I had to prove that I was qualified, was running for the right reasons and knew exactly what holding the office would entail. The truth is, I met all the legal qualifications for running. I tried to learn as much as possible about the roles of ANCs and how they fit into the history of DC. I learned as much as possible about the office, the people serving on the commission and the commitments I would have to make if elected. The reasons why I wanted to run were a little harder for me to articulate. As someone who likes to study identity politics and the politics of representation, I wanted to run, because of who I am. I wanted to run because I am a young, Latina, student. People who share my identities are underrepresented in almost all forms of government across the United States. My ANC is part in the wealthiest ward, in one of the most expensive places to live in the United States. People of color, young people, and students are underrepresented at a local level, in MY neighborhood. I saw running as an opportunity to get involved in my community, to sit at the table with representatives from neighborhoods immediately adjacent to mine, and discuss issues that affect us all. I could never speak on behalf of everyone who lives in my SMD, but I believe that as a Commissioner, I am able to represent the student perspective which often gets ignored by DC local government. Students come and go, few register as voters in DC or make DC their place of permanent residence. However, there are over 16 colleges and universities in DC and many students reside in the district. Students often live, intern, work, spend money, babysit, park and pay taxes in the District just like non-student neighbors. The ANC seat I was running for was going to be left open, unless someone ran. After asking around to see if anyone had made arrangements to run, I realized no one had made concrete plans to. I decided to run, because I saw it as stepping up to the responsibility and privilege of representing the interests of students like me, who have made homes for themselves in DC.

On a more personal level, I ran because I kept catching myself trying to find others to run for the seat so I wouldn’t feel the need to. I ran because I have studied the effects of the gendered political ambition gap. I ran because as Girls Just Wanna Not Run points out, “young women are less likely than young men to think they will be qualified to run for office”. Asking people to vote for me was uncomfortable. I know that part of that was the fact that I did not have experience asking people to vote for me, but I couldn’t ignore the gendered nature of that discomfort. I felt arrogant asking for the support of people who knew me, didn’t question my intentions and were excited for me. I felt like I had to justify my desire to run even though I was not being challenged. On a cognitive level, it is easy to understand that the way women are socialized works against them being self-promoting (being confident asserting their expertise), getting involved in politics (which is male dominated) and demanding credit for serving others (which women are expected to do). It was harder for me to understand how these forces played out in my own life, despite the fact that I could understand them abstractly.

One thought on “True Life: I ran for office because I’m a young Latina”